How to Prevent Steel from Rusting 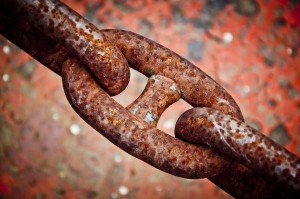 Rust is a phenomenon that occurs when iron — or metals containing iron — are exposed to oxygen. Oxygen causes iron to “oxidize,” typically forming red oxide through a chemical reaction. When this occurs, the distinct red-colored rust may begin to eat through the metal, causing significant and permanent damage. There are ways to protect against rust, some of which we’re going to explore in this blog post. So, if you’re looking to protect one or more steel objects from rust, keep reading for some helpful tips.

While all types of steel can technically develop rust, some are more susceptible to this phenomenon than others. Stainless steel, for instance, lives up to its namesake by featuring a higher level of protection from rust. Stainless steel is still steel, though it contains a higher concentration of chromium (usually around 10.5% minimum). The use of chromium acts as a barrier, protecting the iron from oxidization. With that said, however, even stainless steel will rust when exposed to oxygen, so don’t assume that it’s immune to this phenomenon.

In addition to choosing stainless steel, you can also protect steel from rusting by keeping it dry. As mentioned above, steel begins to rust when it’s exposed to oxygen. Here’s the thing: there’s a substantial amount of oxygen in water, which is why exposure to water causes metals like steel to rust. So, be sure to keep your steel dry. Short-term exposure to water shouldn’t cause any visible damage. But if you leave steel exposed to water for prolonged periods of time, it may certainly develop rust and corrosion.

Hopefully, this gives you a better understanding of what causes steel to rust and how to prevent it. To recap, rust is a phenomenon that occurs when iron or metals containing iron are exposed to oxygen. The iron oxidizes, at which point rust is formed.