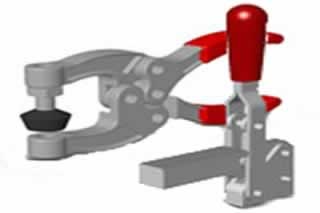 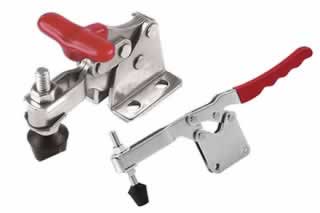 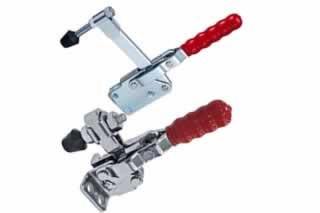 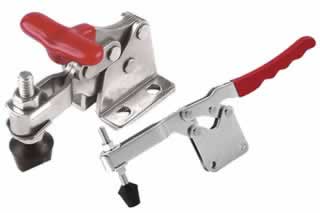 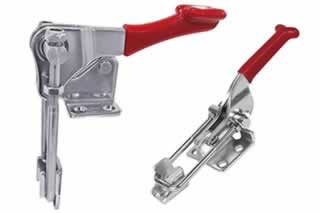 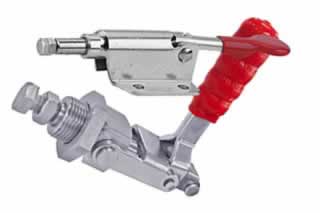 Are you looking for Toggle Clamps?

What is a toggle clamp used for?

A Toggle Clamp is a tool that you use to securely postion parts in position and can quickly be unclamped. In the process, the action of the clamping handle moves the linkage to its center position. Once in position, the linkage clamps over the center point to lock. Toggle clamps are usually used in the production process and is a simple way to position for a wide variety of applications. 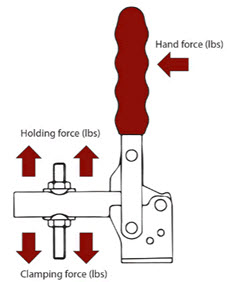 Clamping Force - That which will result from the quoted hand force. Clamps with a fixed clamping position have a single clamping force quoted. Those where the threaded spindle may be positioned at any point along an arm (arm type B) and those with solid arms to be cut and welded as required (arm type A) have clamping forces quoted at the inner and outer ends of the arm.

Holding Force - That which the clamp can withstand after being closed without damage to the clamp and without the toggle unlocking due to distortion of the clamp.

Over-Center Dimension - Carefully chosen in relation to the elasticity of the clamp to maximize clamping force while ensuring that the clamp locks closed even under vibration or intermittent loading. Hand Force - Has been chosen as being that which might be applied in frequent operation. Forces are given in lbs.

Users are responsible for the proper operation and maintenance of the equipment they use. Some equipment will quickly become damaged and unsafe if abused or subjected to improper demands. If equipment is regularly maintained and not abused, you will get the maximum safety and service performance from your casters.