What Are Rare-Earth Magnets? 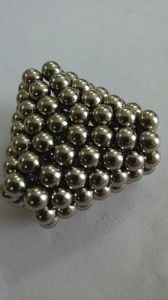 Originally developed in the late 1970s, rare-earth magnets are powerful magnets made of rare-earth metal alloys (hence the name). Standard magnets are typically made of nickel, iron or ceramic, which produces a moderately strong magnetic field. But rare-earth magnets, on the other hand, are produced with alloy metals that offer a stronger, more intense magnetic field. To learn more about this manufacturing marvel and the applications in which it is used, keep reading.

The term “rare-earth magnet” is somewhat of a misnomer since the metals used in their construction aren’t necessary rare. According to a paper published by Robert J Bobber in 1981, rare-earth magnet metals are about as rare as lead or tin.

Neodymium the strongest and most affordable type of rare-earth magnet. Invented in the 1980s, it’s made of a combination of neodymium, iron and boron (abbreviated NIB). Initially, neodymium magnets were expensive to produce (and buy). Thanks to expanded mining operations and patent restrictions being loosed, though, they are now the cheapest type of rare-earth magnet on the market.

Some of the applications in which rare-earth magnets are used includes the following:

There are some potential disadvantages to rare-earth magnets, however, such as its susceptibility to rust and corrosion. When exposed to moisture, oxidation may occur in which results in corrosion and other forms of damage. To prevent this from happening, many manufacturers have begun coating their rare-earth magnets with stainless steel. The presence of a metallic coating doesn’t interfere with the its magnetic field, but it does help to protect against corrosion.