What is a Hex Key? 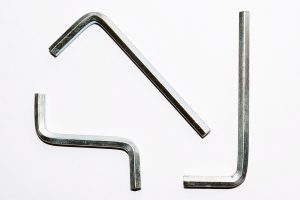 A hex key, also known as an Allen key or Allen wrench, is a small handheld tool that’s used for for driving bolts and screws with a hexagonal socket. They are available in many different sizes, though they all have the same hexagonal-shaped tip. To learn more about hex keys and the benefits they offer, keep reading.

Some people assume hex keys are relatively new, but this isn’t necessarily true. Records show that the concept for a hexagonal-shaped screw drive was around back in the mid-to-late 1800s. Of course, it wasn’t until 1910 when the concept was turned into a functional product. During this time, William G. Allen filed a patent for a cold-forming screw head featuring a hexagonal shape. He later marketed the new screw head under the name “Allen safety set screw.”

Hex keys come in a variety of different sizes, which are measured by across-flats (AF). This is essentially the distance between the two opposite ends of the flat side. It’s important to choose the right size hex key, as attempting to use one that’s too big may damage the fastener or tool.

So, what benefits does a hexagonal-shaped screw bolt head offer over a standard Phillip’s head? As the name suggests, hex hardware features six pressure points, while Phillip’s head hardware contains just four. With more pressure points, you’ll have an easier time “gripping” the screw or bolt, making it easier to drive in or out. Now, if you’re only driving a single screw or bolt, it probably isn’t going to make much of a difference. But if you’re taking apart a large piece of furniture, equipment, or a machine, hex hardware reduces fatigue while allowing you to work more efficiently.

Furthermore, there’s less risk of stripping the bolt or screw when the hex design is used. This alone is a huge benefit that draws engineers to choosing hex hardware instead of Phillip’s head. Hex screws can still be stripped, through it takes longer than other designs.

To recap, a hex key is a tool used to drive bolts and screws with a hexagonal socket. With six driving points, they are easier to use and less likely to strip than their Phillip’s head counterpart. Of course, hex isn’t the only design that offers these benefits. Another popular alternative is torx. Monroe Engineering carries both long and short neck Hex Keys.