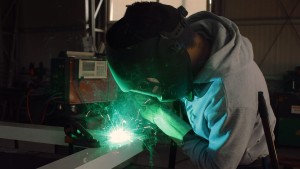 The American manufacturing industry continues to grow, with analysts shedding new insight into the market’s current and future prospective outlook.

So, what factors are driving the manufacturing market’s growth? For starters, President Trump has announced plans to revive American manufacturing by encouraging companies to “reshore” jobs back to the U.S. Additionally, he’s expressed desire to renegotiate the NAFTA deal between the U.S., Mexico and Canada. While some analysts remain skeptical of President Trump’s plans, the recent ISM rating and other signals indicate the market is growing, which is a positive sign for workers and investors alike.

Apple Inc. also announced plans to invest $1 billion into strengthening the American manufacturing market. Earlier this month, Apple said that the first recipient of its funds will be Corning, the maker of durable glass for smartphones, tablets and other electronic products. Corning is known for its Gorilla Glass, which lives up to its namesake by offering a superior level of strength and durability.  Based on New York, with a production plant in Kentucky, Corning has been a business partner of Apple for several years now. According to Corning CEO Wendell Weeks, this long-standing partnership between Apple and Corning had led to the creation of some 1,000 new manufacturing jobs in the U.S.

The U.S. is the world’s second largest manufacturer, only behind China. In the third quarter of 2016, manufacturers reported an industrial output of $2.18 trillion. The American manufacturing market hasn’t always seen this steady, strong growth. From 1983 to 2005, exports increased by 340%. Soon after, however, it suffered a period of contraction during which the market shrank. Currently, however, all signals point towards a strong manufacturing industry.