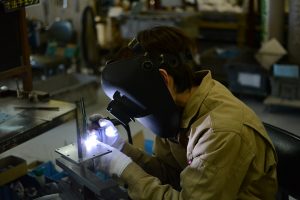 While some analysts remain dubious over the future of the US manufacturing industry, new employment numbers reveal a strong, healthy industry that continues to grow. According to a report released by the Bureau of Labor Statistics (BLS), unemployment in the US has dropped below 5%, which is the first time it’s been this low since 2008. What’s even more impressive is that the manufacturing industry created nearly as many new jobs in January 2016 as it did in 2015.

But it’s not all good news for the country’s manufacturing industry. The BLS adds that hiring in the manufacturing industry is still down. So, what’s causing the low employment numbers? There are several factors contributing to this phenomenon, one of which is the ever-falling price of oil. Granted, consumers benefit from lower prices as the pump, but it ultimately hurts the manufacturing industry due to the near-historic low prices. Another factor that’s playing a role in this trend is instability within China’s market, which has left investors to question the market’s volatility.

On the other hand, the surge of new manufacturing jobs lays to rest rumors that the industry is headed for a recession. As noted by TD Economics’ Michael Dolega, the BLS report paints a different picture of the industry.

“For those looking for confirmation that the U.S. economy may be headed for a recession, this morning’s report will surely disappoint,” said TD Economics senior economist Michael Dolega. “Sure, the headline payroll gain slowed from the red-hot fourth-quarter pace, but much of it was to be expected given the overly warm start to winter.”

You might be wondering how other industries fared in the BLS report? Well, the report found that other industries averaged roughly 29,000 new jobs in January, whereas manufacturing added 33,000. That’s the fourth consecutive month with employment gains in the manufacturing industry, which is pretty impressive to say the least.