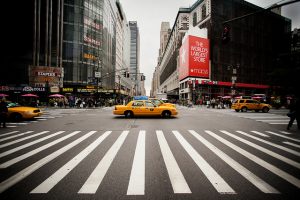 Fast food workers in the Empire State will soon receive a sizable pay increase, thanks to a new law signed into effect by New York Governor Andrew Cuomo.

Following in the footsteps of Los Angeles and Seattle, New York has raised the minimum wage of fast food workers to $15 per hour. Up until now, fast food workers in the Empire State had a minimum wage of just $8.75, which most experts agree is not enough to live on, especially in a state like New York. This prompted Governor Andrew Cuomo and State Labor Commissioner Mario J. Musolino to pass a new bill bumping up the pay for these workers to $15 bucks an hour.

According to an article published by Vice, an overwhelming 40% of food service providers in the U.S. live twice below the national poverty line. The article goes on to reveal that food service providers in the U.S. use food stamps twice as frequently as the general workforce, attesting to the need for higher wages. Of course, fast food workers have publicly expressed the need for higher wages in recent months, many of whom have participated in marches at the capital and Times Square in an effort to raise awareness.

At first glance, the thought of bumping up the pay for New York fast food workers to $15 per hour may sound like a good idea. After all, it would put more money in workers’ pockets, allowing them to live more comfortable while stimulating the economy in the process. However, not everyone is thrilled with the idea of such a steep pay increase. As noted by the Empire Center for Public Policy, this would essentially raise personnel costs by an estimated $25 million for executive branches and $39 million for the New York City.

“A pay bump to $15 an hour would boost personnel costs by $25 million for the state’s executive branches, and by $39 million for New York City,” said the Empire Center for Public Policy.

There’s also the issue of whether or not fast food establishments can even afford to pay their workers $15 per hour. Going from $8.75 to $15 per hour is a huge jump to say the least, and it will likely force some fast foot establishments to lay off workers and/or cut hours from their existing workforce.

Do you think raising the minimum wage of fast food workers to $15 per hour is a good idea?