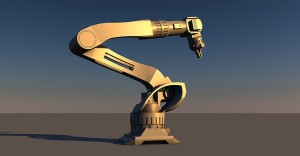 Robots and other automated equipment have become an integral part of the manufacturing industry. They allow companies to manufacture products faster, more efficiently, and with less risk for human injury. But there’s been a growing debate in recent years regarding the impact that robots will have in regards to employment. According to an article published by DigitalTrends, roughly 5 million jobs will replaced by robots by 2020.

Not everyone is concerned about robots stealing manufacturing jobs, however. On the contrary, some people believe that it could help strengthen the industry.

With that said, even China knows the benefits of robots in the manufacturing industry. Statistics show that Chinese manufacturers purchased twice as many industrial robots in 2015 than their American counterparts (68,000 vs 27,000). If American manufacturing companies want to compete and stay relevant, they must adapt by embracing automation and robotics technology.

You might be wondering how exactly robots are being used in the manufacturing industry. Well, “industrial robots” aren’t necessarily the same robots that you may envision when thinking about robots in popular science-fiction movies. Industrial robots often consist of moving arms and grabbing mechanisms, controlled by a computer or human machine interface (HMI). They look almost like a human arm, featuring joints and a manipulator. They can be used to perform a wide variety of tasks in the manufacturing industry, some of which include lifting heavy objects, assembling objects, manipulating objects into place, welding metal/materials, painting objects, and much more.

Robots are also used extensively on the assembly line. Depending on the specific application, they can also be used in place of human workers, performing the same or similar task.