Recycling Copper: What You Should Know 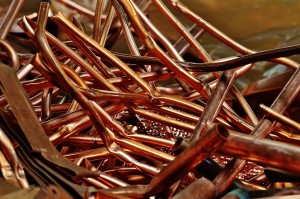 If you’re looking to make some extra cash, you should consider recycling copper. While not as readily available as aluminum, it’s worth more than its aluminum counterpart pound for pound. Assuming you have enough copper items to recycle, you can put some extra spending cash in your pocket.

Copper is a red-brown metal with the atomic number 29. It’s found in various locations, including hydrothermal veins, basalt pockets, and oxidized zones.

Like aluminum, copper is 100% recyclable. This means no copper is wasted as a byproduct when it’s melted down and recycled. Copper is also the third most commonly recycled metal, only after iron (the first) and aluminum (the second).

One of the characteristics that makes copper attractive is its high electrical conductivity, allowing it to transmit electricity with minimal resistance. Of course, this is why it’s commonly used in electrical wiring. According to a report published in the Wire Journal International, copper is the preferred electrical conductor in practically all types of electrical wiring, with the exception of overhead power transmission (aluminum is preferred).

Items Made of Copper

So, what are some common items made of copper that you can recycle? As mentioned above, copper is one of the most electrically conductive metals on the planet. Therefore, it’s commonly used in wires and cables. According to the book “Copper and Copper Alloys” by ASM International, roughly half of all copper produced is used for this purpose. If you have any old, unused cables or wires lying around your house, check to see if they contain copper.

Many plumbing tubes, fittings, valves are also made of copper. Because its softer than iron, copper pipes are easier to shape. Furthermore, they boast a low cost of installation because copper is easily joined by conventional soldering.

Other items that may contain copper include the following:

Wait! Before You Recycle…

It’s a good idea to call around and get quotes from multiple recycling facilities before hauling off your copper. Find out how much each facility pays for copper, and choose the highest paying one. Also, keep in mind that recycling rates change on a daily basis, so consider waiting for a “peak” in copper rates.